Here we are in Cheltenham, recovering from a week of various events, generally rather boozy, enabling us to meet up with beer drinkers, Masterminders and cruciverbalists.  Can’t honestly say that London, which seemed to be largely under excavation, sparked any feelings of nostalgia, and we were glad to head west, albeit in a car Hertz insisted on upgrading to something the size of a small tank.  (I discovered two additional seats – making a total of seven – lurking under the boot space.)

Anyway, before leaving London, there was a gathering of Gruntlings in the august surroundings of Inner Temple.  It’s been something like 25 years since a group of crossworders started meeting at Grunt’s in Maiden Lane, and many of those attending weren’t coming to Cheltenham, so it was useful to meet up.  The food was provided courtesy of Robert Maxwell’s former chef, and in quantities that quite prostrated me for the rest of the day.  Here’s a few pictures:

Here we have Tim Moorey (aka Mephisto), Anne Bradford of dictionary fame, Sally whose surname alas I can never remember, Peter Chamberlain from the Telegraph roster, and in the background, Chris Brougham (Dumpynose, who’d secured us the venue) and Richard England. 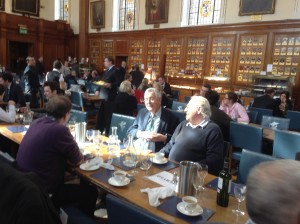 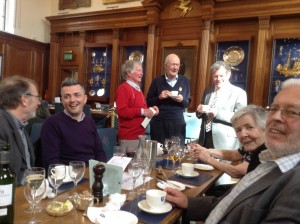 And here we have three new faces on the left: Colin Clarke (Buff in The Listener), CROSSWORD clue judge Will Drever, and CROSSWORD supremo Brian Head.  It was very kind of them to set up the event, and I think everyone had a great time (including John Tozer, who seems to have escaped my iPad’s lens).

Then on to Cheltenham for the annual Listener Dinner, which I last attended in 2005.  I organised a lot of these events in my time before escaping to NZ, so it was more relaxing to attend as a guest.  I think we set a record for the longest distance travelled by Listener Dinner attendees (one unlikely to be broken, I guess).  Good food, and camaraderie engendered by a table quiz, and the evening passed quickly.  The key announcements were the identification of the latest all-correct solver, and his subsequent nomination of the puzzle of 2013.  Here’s solver Simon Melen receiving the Solver Silver Salver: 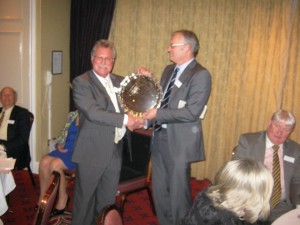 And here he is, in turn, handing the Ascot Gold Cup (in reality a silver rose bowl – I wonder who came up with such odd names for the trophies…?) to Quinapalus (Mark Owen) who achieved the rare feat of having two puzzles in the top five:

And after that, chat and booze before staggering to bed at some point on Sunday morning (3 am in my case).  I’d quite forgotten what fun it was.  Some I didn’t catch up with till a rather bleary breakfast.  Regards to all, and maybe one day I’ll be back.

This site uses Akismet to reduce spam. Learn how your comment data is processed.