How did this puzzle come about?  Well, back then I was what now seems bumptiously confident, and thought you could just submit a puzzle anywhere.  So I took a standard Spectator grid, produced what you see below (bar six clues) and sent it off to the editor of the magazine.  What followed was what Wodehouse memorably likened to ‘dropping a feather down the Grand Canyon, and waiting for the echo’.  And in that limbo it has remained, until I found it in my files.

See what you make of it, and please let me know if you have any comments. 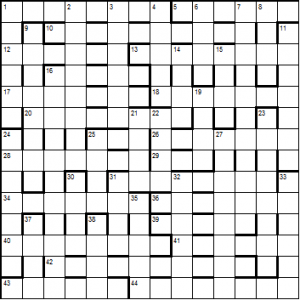 6 19 describes each of the lights clued by a number, including 44 where no number is relevant.  There are alternatives for some of the numbers. 10 across, though common enough, is not in Chambers.

This work is licensed under a Creative Commons Attribution-NonCommercial-NoDerivs 3.0 Unported License.