This one is going to go off at a tangent later, so hang on.  (There are pictures, as well!)

The puzzle itself isn’t so bad to explain.  The inspiration was the name Nemo (see below for why), and I was interested in what you could do with that.  There were three I could think of – the character in Bleak House; the clownfish; and Verne’s hero.  The last two clearly had something aqueous in common, so the first one (also the least familiar) fell at the first.

Nemo and his vessel came to twelve letters – twelve is always a good sign for a barred grid, and the idea of Nemo being in some way aboard the Nautilus developed.    The whole thing seems to have come together in a bit of a lump, really, as this image shows: 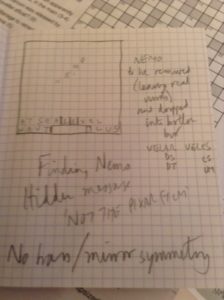 with pretty well the whole puzzle laid out in utero, as it were.  Seeing it all like that actually makes it harder to recall how the ideas came together, but it’s true that occasionally a puzzle leaps fully formed into being.

I got quite a way with it, and the IQ editor suddenly said I had a slot in May at a time when I was working on a puzzle for – um, let’s say ‘another date’, shall we?  And then The Independent decided to move to online-only format, and the future of the IQ was in doubt.  So work was further shelved.  When the IQ was assured of a home, the editor popped up again with the suggestion about May.  By that time it had dawned on me that Finding Dory was due to come out in June, so squeezing something about Finding Nemo into May was not a bad idea.  So off the shelf it came, and was polished off in a week or so. 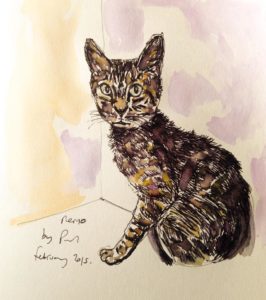 Yes, another cat, although I don’t think we’ve had one drawn by an English novelist (and writer for Dr Who) before.  We took on Nemo from the local cat shelter because he was old, and old cats don’t get chosen.  We didn’t have him very long (he developed congested breathing one day, quite suddenly, after only a couple of weeks) but he was quite a character, and very independent-minded (although he didn’t come in an online-only version, of course).  He was with us for so little time that I never got round to putting him on the Cats page, but I will now.

How he came to be drawn by a novelist is one of these corners of social media that I can never quite fathom.  I knew the name of Paul Magrs as a novelist from the unexpected fact that he set some of his books in Newton Aycliffe, which is not a place where one would expect magic realism to flourish.  Some years ago he and his partner took on an elderly cat called Fester, a 12-year-old stray who suddenly decided he wanted a home.  I bought his book about Fester, Marjorie read it, and started following Paul Magrs on Facebook.  She announced Nemo’s passing, and suddenly there was a picture from Magrs (who tries to draw one sketch every day), based on one of the photos she posted.

So there you go.  Do  try Paul Magrs’ blog, or his shop, and look up the comic Gothic horror stories about Brenda and Effie (Whitby is a much more welcoming venue than Newton Aycliffe).

Meanwhile the social media thing has evolved, and Marjorie is off to a conference in Arizona all to do with cat-blogging (actually, it’s some sort of double conference: the Cat Writers Association and Blogpaws, so there are two conference dinners on consecutive nights).  Yes, I’m going too (Grand Canyon, Flagstaff Observatory, perhaps even the Meteor Crater…), so there may be a missed post or two, though I’ll try and give some idea of what a cat-blogging conference is all about.  And I may pick up a few blogging hints myself.