There are various ways of classifying crosswords.  One way is the distinction between definition and cryptic clues.  This site is, almost entirely, about cryptic crosswords.

Even once that has been decided, there are different types of cryptic crossword.  I’m going to break them down into three broad categories – all three of these categories will appear on the site.

These are what most people will think of when they hear the word ‘crossword’ – a grid of squares where the ends of words and the spaces between words are marked by one of the squares being filled in, forming a block.  Most often the grids for cryptic crosswords are 15 squares by 15 squares, but that isn’t obligatory.  A 15×15 puzzle will generally have around 30-32 words in it.  Here’s an example: 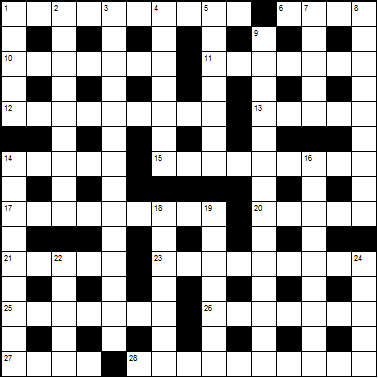 As Phi, I have set over 1,000 such puzzles for The Independent.  Some publications will feature a cryptic puzzle in which the clues and answers contain references to the subject matter of the publication: the Church Times has such a puzzle, and my own long-running series in the BBC Music Magazine is another example.

These look very different from type 1, but they aren’t really.  Word endings and divisions in these puzzles are marked by bars.  The standard size of such puzzles is 12 squares by 12 squares, but a higher proportion of letters in each answer are checked by crossing answers.  The words are more densely packed, so, although the grid is smaller, these puzzles tend to have 32-36 answers in them.  The vocabulary of these puzzles is generally more recondite than for blocked grids, and it is usual for a reference to be given.  Almost invariably that will be the current edition of The Chambers Dictionary.

To date, I’ve set over 500 of the Beelzebub series in the Independent on Sunday.  That pales into insignificance beside Azed in The Observer (2,000+ and counting), while the Mephisto series in The Sunday Times (also at 2,000+) is currently set by a troika of setters.

I’m not going to show an example of a thematic, as it would only be misleading to some extent.  Thematics are frequently barred, but they won’t necessarily be square – some are rectangular, some circular, I even set one in a curious double-L shape.  This is because a thematic crossword, as the name implies, sets out to embody a theme.  The theme may dictate the shape, or the available thematic words may encourage the use of a rectangular grid – it is difficult to be hard-and-fast in describing these puzzles.  Often the clues will have added twists – misprints, or ignoring certain letters of the answer in wordplay, and so on.  The best way to observe the diversity of these puzzles is to experience it by solving them – it is a steep but exhilarating learning curve.

The Apex puzzles on this site are relatively straightforward examples of thematics.  Explore the links to the right to see more unusual examples at The Listener, The Magpie, The Crossword Club and the Enigmatic Variations (in Telegraph Crosswords, where a subscription is required).

This work is licensed under a Creative Commons Attribution-NonCommercial-NoDerivs 3.0 Unported License.