This isn’t strictly anything to do with crosswords – but there is a puzzle coming up in November reflecting the wide range of burgers in the annual foodfest that is Wellington On A Plate – the burger fortnight.  Many of them have unexpected names, providing a good deal of material for words in a grid.  There were 132 this year – for a fortnight’s festival, that makes for a fair number of burgers to eat per day for the judging.  I managed five, one down on 2018, though I did maintain the rule that each burger be eaten in a different suburb.  So here they are – note the names (none of which made it to the grid) and then try to guess which of the entries in the puzzle on November 8 (as currently scheduled) contributes to the name of a burger.

This had a vegan option including vegan whipped feta – I couldn’t help wondering whether this was whipped by or with vegans, which only goes to show that adjectival order is important.

This place is one of our regular stops, even if it means driving over the hills to the Wairarapa.  Last year they did venison with chocolate, so there’s someone there with a sweet tooth.  The sole drawback were the fries in a silly little basket wherein they got cold very quickly. 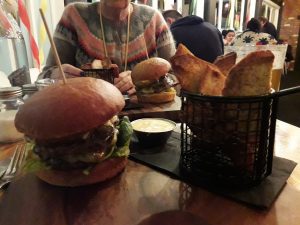 Our local burger.  I skipped the beer for another local brew from a craft brewery called Fortune Favours, who were themselves offering a burger at the cafe on their brewery premises.  It all gets very incestuous.  K?mara and taro make better wedges than your everyday potato.

The crispy chicken skins were like chicken-flavoured bacon, if you see what I mean.  Three whole fries, but what a size, though not terribly crunchy.

The Queen of Jackson (Petone)

I have a vague feeling this name occurred last year.  A very neat burger – actually capable of being picked up, and served with corn chips, which don’t go cold!  Ameatgos will not be appearing in a grid any day soon.

While awaiting this burger, Marjorie took a snap with which I can remind you that, while I’m appearing as usual on Friday (6 September) I’m being followed by Monk on the Saturday…

This site uses Akismet to reduce spam. Learn how your comment data is processed.