This is a simple idea, and there isn’t much to say about it.  I can’t even say I was particularly thinking about crosswords when the phrase ‘content may vary’ popped into my head.  It seemed to be a useful sort of concept for a puzzle – fairly immediately the thought of jumbled internal sections of words came to mind, followed by the idea that the message to be deduced might lie in the ‘wrapping’.

An early consideration was the actual phrase itself: ‘content’ or ‘contents’?  Fairly obviously, the latter would have an odd number of letters, which would put paid to pairs of letters forming the wrapping.  Similarly, any thoughts about using the longer forms (with the addition of ‘from that/those illustrated’) also ran into the odd length issue.  Fortunately, Google hits suggested the singular form was as common as the plural.

I’m not a very visually-minded person, but it was also clear early on that the thematic entries would be across only, and would sort of ‘stalk’ down the grid.  No idea why, that was simply how it came to me.  Here’s a couple of sketches I stumbled on today: 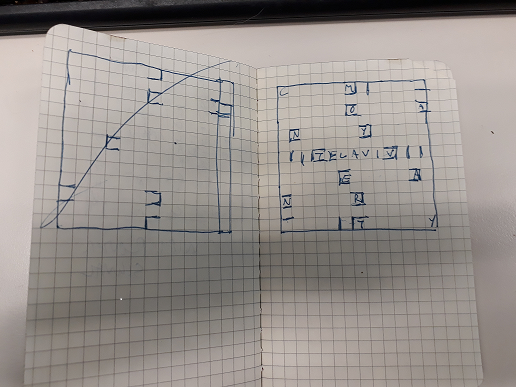 As you can see, I can’t always count 13 columns on squared paper correctly.  I was slightly annoyed to get a couple of other entries of seven letters with first and last unchecked, but I rationalised that as a form of diversionary tactics.

The final hurdle was that V.  I always planned the phrase to be read in initial then final letters, which instantly threw up the unlikelihood of a word T___V meeting my criteria.  When TEL AVIV turned up in my search I knew we were good to go.